Fran Hansen has created this absolutely gorgeous masterpiece today. As well as being beautifully proportioned, stunningly presented, well-seasoned, appropriately accesorised and delicious to the eye, Fran can bang out an amazing fryup and this is one of her best.

You can see more of Fran’s work at the Facebook group, the notorious Fry Up Police, where people swear at food.

Dr Fry had a rough day in surgery yesterday, but was delighted to find on his return to the estate that Mrs Fry had purchased a new piece of fryup crockery. A beautiful big heavy triangular Portuguese plate!

Following several whiskies it seemed like a good idea to christen the new addition and pans were rattled. The end, slightly drunken, result was this delicious fryup. Quite a challenge to plate up, particularly as quite a long home-made pork & sage sausage was selected. Also notable was the incredibly tasty bubble and squeak. The dish did include some lovely chestnut mushrooms but in his haste to smash this up they were inadvertantly left in the pan.

Dr Fry mentioned Susan Rice in an earlier article, she is a celebrated and infamous mycoprotein architect who provokes passion, anger and joy wherever she exhibits. We do not usually comment here on dishes that are not a fryup, however we do like to recognise creative genius and technically spuds & quorn could be in a fryup so here is……

Many people love a slice or two of white pudding on their fryup. There are lots of regional variations but traditional Cornish Hogs Pudding is Dr Fry’s absolute favourite. If you are lucky enough to live in the South West of England, many supermarkets stock this product and lots of butchers make and sell it.

In the absence of retailers local to Fry Villas who stock such a delicacy, Dr Fry has worked tirelessly for many minutes researching different recipes and preparation methods and we have arrived at a quite an authentic and traditional Hogs Pudding which is relatively easy to make and store for future fryups.

The mix is prepared as described however ensure you use a fatty pork mince or minced cuts of pork, fresh breadcrumbs (toasted or stale ciabatta makes a fantastic breadcrumb), or for a finer pudding, ground up cream crackers.

We make quite stout sausage-shapes then wrap them snugly in several layers of clingfilm then poach gently in water for 30-40 minutes. 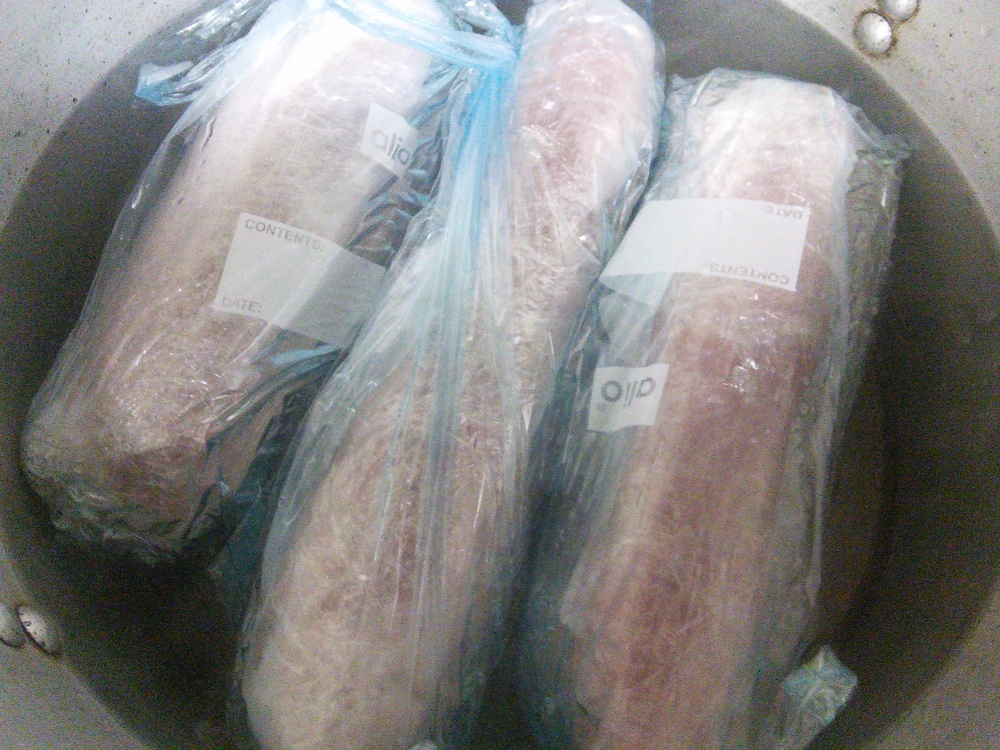 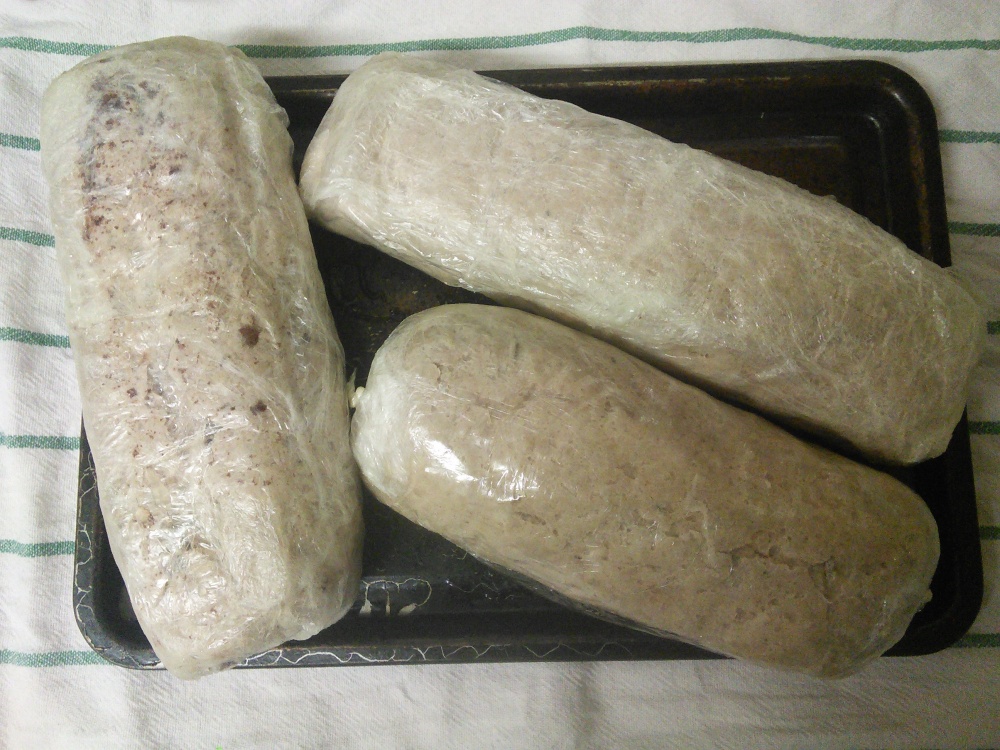 Cool, slice and Fry! Surplus pudding can be stored in the freezer for up to three months

You may also enjoy the idea of stuffing the Hogs, here is one stuffed with bury black pudding although there are many other delicious possibilities.

A chef recently tasted one of Dr Fry’s fine Hogs Pudding and told him it reminded him of the very best Iberian Wild Boar sausage!

Today Dr and Mrs Fry had a spot of lunch at the Onion Deli in Aigburth, Liverpool. It had excellent reviews on TripAdvisor,  the fryup sounded nice on their website menu so we toddled down there to check it out.

I have to admit I was more than a little bit disappointed. 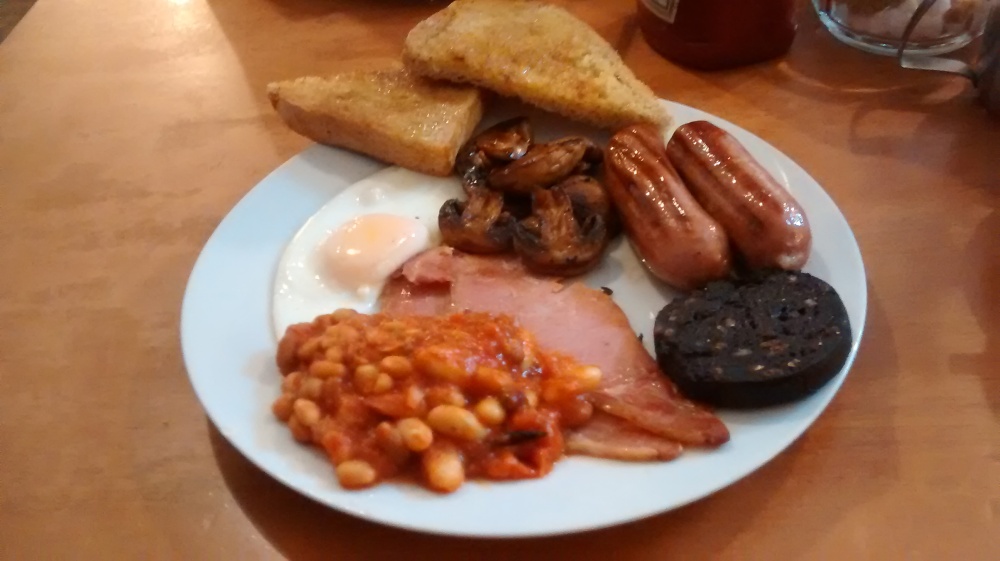 The home made beans were excellent, the single egg was lovely, the warm buttery toast was very nice, the mushrooms were buttery and very tasty but the black pudding and bacon were below average and the sausages were rather nasty and cooked very strangely, despite being described as ‘quality’ on their online menu. I would have liked some tomato and another egg, the price was actually £6.20, not £5.95 as advertised on their website. The free ‘brew’ was also not included.

This was not the only thing not as advertised. They are displaying 5* hygeine notices when in fact they were inspected in March and awarded 4*. This is quite naughty. The lavatory was rather dirty and the whole establishment looked like it could do with a good clean. 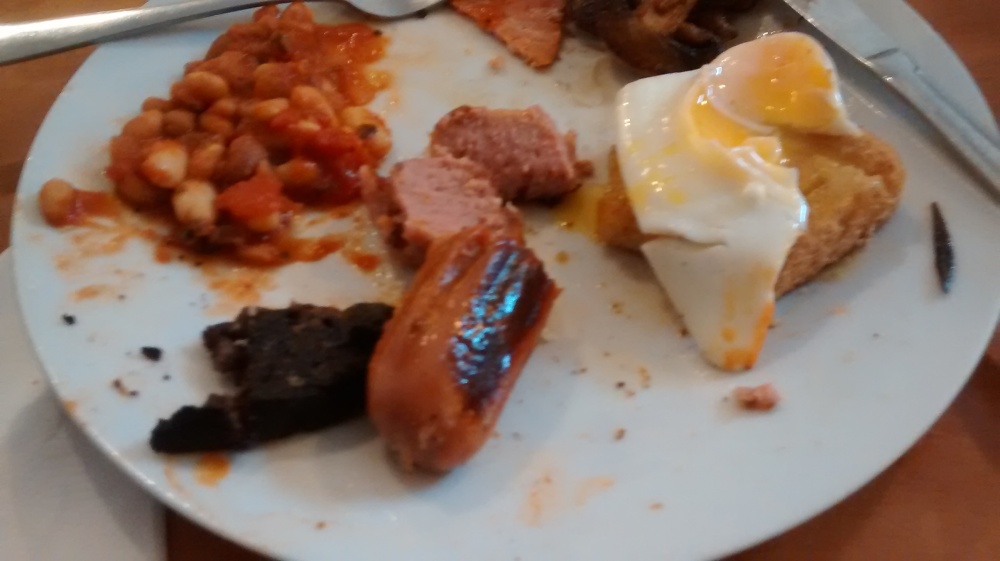 Some reviews describe this establishment as ‘shabby chic’, sadly it was more of the former and not enough of the latter. I couldn’t help but feel that it wouldn’t take an awful lot of work or investment to really smarten the place up without losing any character.

They also really need to seriously consider buying decent bangers and cooking them in a frying pan. I would have happily paid £6.99 with halfway decent sausages, an additional egg, half a grilled tomato and the aforementioned but sadly missing cup of tea included.

For the record Mrs Fry had a Frittata with a generous helping of assorted salads which all looked very nice and I am assured that it tasted good too.

The staff were extremely pleasant and friendly, but they do need to sort out the meat on their most expensive dish. Dr Fry gave you a medical today Onion Deli, it’s not terminal but you really need to think about making some changes.

Check out this food blog, ’tis very excellent, especially if you intend to eat in Brighton –

As you may recall the Fry household is now in possession of a meat-grinding/sausage-stuffing combo that came as a lovely surprise early Father’s day gift. Sausages have been made. Lessons have been learned. Some great bangers have emerged.

So far we’ve had a dodgy batch of English Breakfast sausages (the only time Dr Fry actually followed a recipe) which were overstuffed and had store-bought breadcrumbs in, so they exploded. Two batches of Lamb & Leek which have been sublime, and a batch of herby pork plus one of pork with fresh Blackcurrant Sage and caramelised red onion chutney. The latter were absolutely astounding. 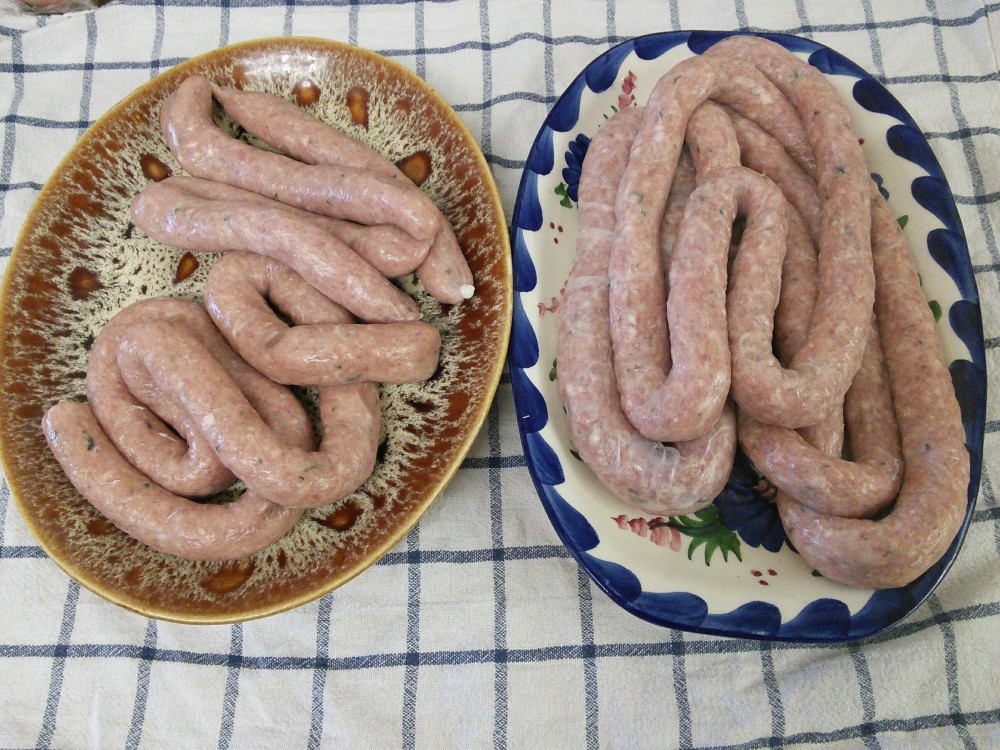 …and a couple of Dr Fryups featuring his home-made sausages, herby pork on the first one with a cheeky chorizo hash brown in the middle, Lamb & Leek/Sage&Onion in the second with one of Dr Fry’s patent buuble&squeak-stuffed hash browns.

All the bacons so far on our almost scientific tests (here and here) have been supermarket varieties, Dr Fry thought he’d try his local butcher’s offer to see how that stood up today so he picked up some middle cut (kind of half back half streaky) umsmoked for the trial by fire.

Weighing in at 77g one slice was enough for the test, looked lovely with a nice thick proper rind that was snipped to ensure it cooked evenly.

Not an awful lot of white snot and it’s smelling good. Four minutes each side as usual.

Blimey, down to 33g. So the stats, 75g down to 33g is a massive 56% shrinkage, but at £7.33 a kilo this was really nice bacon with a firm texture, crispy rind and a proper baconny taste. Naturally it went straight into a fresh brioche bun with tomato sauce for further testing. 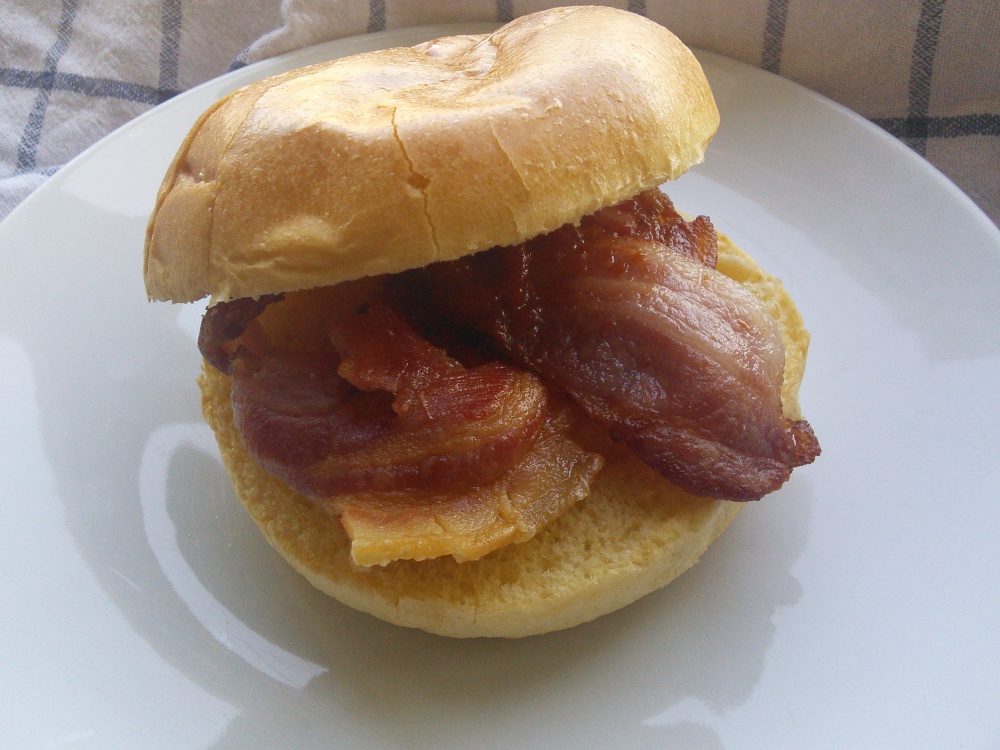 Doctor Fry trys to keep abreast of current affairs, particularly when it comes to food policies. A short while ago there was a General Election in Britain.

Not long after the results were announced, Dr Fry visited one of his favourite places on the internet to admire the work of hungry fryup enthusiasts, the notorious Facebook group The Fry Up Police (many of the guest fryups featured on this blog were originally critiqued there).

One of his colleagues, Dr Webster had quite ingeniously created a beautiful post election fryup there, which sought to represent the state of the nation through the medium of fried food. Dr Fry thought this was a marvellous idea and cooked up a response to Dr Webster’s statement. Below are the results of our endeavours. Dr Webster’s first.

“The Election Special Fry Up: Whatever your politics, our proud nations produce some great food. I’ve picked elements from the almighty FUP Venn from Scotland (haggis), Wales (cockles), Ireland (potato farl and soda bread), Cornwall (home made hog’s pudding – thanks for the recipe David Rowland) and England (bubble and squeak – I made a rosti out of it – and Henderson’s Relish). The remaining bits (sausages, bacon, eggs, black pudding, fried bread, etc.) are probably common to all countries. Of course it wouldn’t be right without some interference from our erstwhile colony the U.S. of A – so thanks for the hash brown guys. All meat and eggs from Griffins the Butchers in Newbury.”

“I have cooked some food in order to respond to David Webster’s ‘election day fryup’ which purported to represent the state of our once great nation. I feel that this fryup better reflects where we truly find ourselves today.The mushrooms are like our health and social care services, slashed repeatedly yet still somehow managing to maintain some structural integrity. The black and white pudding both celebrates the ethnic diversity of our proud land as well as highlighting the stark divisions between communities. All the costlier items in this fryup, the wealth of this allegory, are being hoarded on the far right whilst on the left, the humble worker eggs toil ceaselessly upon their fried slices. The smug Cameronian hash brown is clearly putting the oppressed eggs under almost intolerable pressure. The beans, well they are just f****ng beans. I f****ng love beans me.”